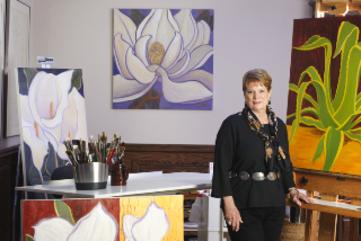 A native of Arizona, Gerry Grout came from a ranching family that moved to the West in 1909. Interested in the visual arts since childhood, she earned her first prize at the age of ten with a painting of sunlight highlighting Arizona boulders. She is motivated by the solidity and linear quality of natural forms. She prefers to paint in series and is currently concentrating on her sixth series that involves Southwest images.

Her early childhood interst in art was furthered by study at the University of Arizona, University of San Diego, Phoenix College and the Scottsdale Artists School. Since studying with nationally known artists such as George Nicolaides, Robert Kushner and Carolyn Katchen, Gerry has developed her own style in depicting her subject matter.

Gerry is a Life Member of the Arizona Artists Guild Hall of Fame and a juried member of the Arizona Watercolor Association. She has won jurors’ Best of Show and numerous choice awards. She is the author of a book titled “Linear Images of the Living Figure." The book includes sixty drawings of nude figures, many of which are used as references for figurative paintings. Her images have been featured in many national art publications.

Gerry has served as a docent and member of the Director's Circle at the Phoenix Art Museum. She was a Board and Founders Circle Member of the West Valley Fine Arts Council and Chairman of the Arizona Artists Guild's Scholarship Program. Gerry provides an annual scholarship to encourage the continuation of college art students.

She was a volunteer art teacher at a Juvenile Correctional Center, a member of the West Valley Arts Council Building Campaign and a member of the recently completed Arizona Artist Guild building project.